Little Aston has a long history which has shaped the community today. In Roman times, Ryknild Street cut through the heart of Little Aston to link up with Watling St nearWall. The links with Shenstone and Stonnall can be traced back to the Domesday Book with the settlement of Aston mentioned with Footherley, and Woodend alongside Stonnall and Lynn Chesterfield, within the parish of Shenstone.

This Web site is best viewed in “landscape” mode on tablets, and in “portrait” mode on smaller mobile devices. Use the left hand menu bar to find out more about our our communal buildings (under Halls for Hire) and our numerous village groups and clubs which cater for a variety of leisure activities. Plus of course our church and recreation ground.

In 1818 when the Enclosure Act came into force, large areas of Little Aston Common (adjoining Sutton Park) were assigned to William Tennant, the then owner of Little Aston Park, which doubled the size of the estate. The estate was sold in 1828 to William Leigh who, records show, owned 2,590 acres (of which the hall and park amounted to 770 acres). The hall mentioned is Little Aston Hall which was built in 1730 in a Georgian style with a park and a lake.

Little Aston became a separate ecclesiastical parish within Shenstone on consecration of St. Peters Church in 1874, with the church being built at the expense of Edward Jervis on land donated by him.

Little Aston Hall passed through various owners in the early 1900s until in 1925 the Little Aston Hall estate of over 1,500 acres was broken up, with the Hall and 118 acres surrounding it, purchased by a Harry Scribbans. The remaining land was sold piecemeal by auction leading to the current Little Aston Park estate as we now know it. 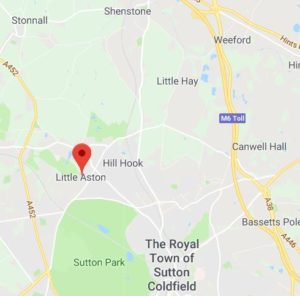